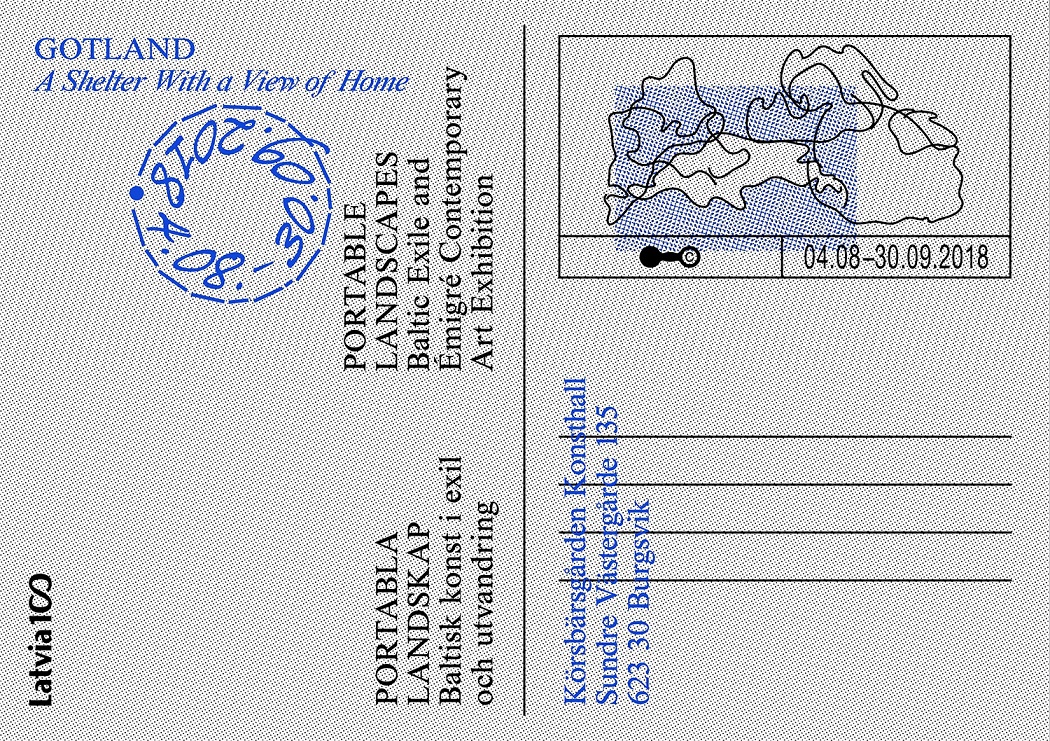 Portable Landscapes. Gotland. A Shelter with a View of Home

On August 4th, the Latvian Centre for Contemporary Art, in cooperation with the Baltic Art Center, will open the exhibition Portable Landscapes. Gotland. A Shelter with a View of Home. at the Körsbärsgården Konsthall. This exhibition of contemporary art connects to this year’s centenary of the Baltic states through a selection of works with links to the Baltic diaspora in Sweden.

The site Gotland is important as it was the closest neutral shore to the Baltic republics during the Soviet occupation and played a significant role in the Latvian and Estonian history by becoming a shelter for many thousands of refugees crossing the Baltic Sea in boats during the Second World War.

The exhibition shows the Baltic born artists – Latvian painter Laris Strunke and Estonian painter Enno Hallek – who fled to Sweden in small boats during the war. Both of them have received art education in Sweden and have become acclaimed artists here.

LCCA, in collaboration with Baltic Art Centre have commissioned new contemporary artworks by Latvian artist Inga Meldere and Finnish artist Mikko Hintz, who, living abroad from their countries of origin, have addressed and interpreted the theme of the migration and historical context in Gotland. In addition, photos of the reception of the Baltic refugees on Gotland from the archive of local photographer David Holmert, will be shown.

The exhibition is a part of a larger research and exhibition project that explores Baltic émigré and exile artists in a broader context of art processes, migration and globalization of the 20th century carried out by the LCCA on the occasion of the celebration of the Latvia’s centenary. The project consists of four satellite exhibitions in Paris, New York, Gotland and Berlin, with the central exhibition Portable Landscapes, held at the Latvian National Museum of Art in Riga during the period 2017-2019.

“If we take a longer look back, people’s migrations caused by wars or political and economic changes have taken place ceaselessly. Exile, diaspora and migration are characteristic elements of global culture and their manifestations have not only determined changes in the world’s map but also contributed to the basis for the development of various trends in art and culture, promoting the blending and overlapping of cultures and the birth of new ideas and movements,” believe the curators of the exhibition Solvita Krese and Diāna Popova.

Körsbärsgården The exhibition is on view from August 4 - September 30, 2018 at Körsbärsgården Konsthall, SUNDRE VÄSTERGÅRDE 135, 623 30 Burgsvik, Sweden. The gallery is open daily 11AM - 5PM in August and weekends in September.

The exhibition Portable Landscapes in Gotland is part of the celebration of Latvia’s centenary and is supported by The Ministry of Culture of the Republic of Latvia, State Culture Capital Foundation of Latvia, Frame Contemporary Art, Finland.

The works by Inga Meldere and Mikko Hintz were realized through the AIR_BALTIC residency at BAC with support from Nordic Culture Point in the framework of Nordic–Baltic Mobility Programme for Culture.