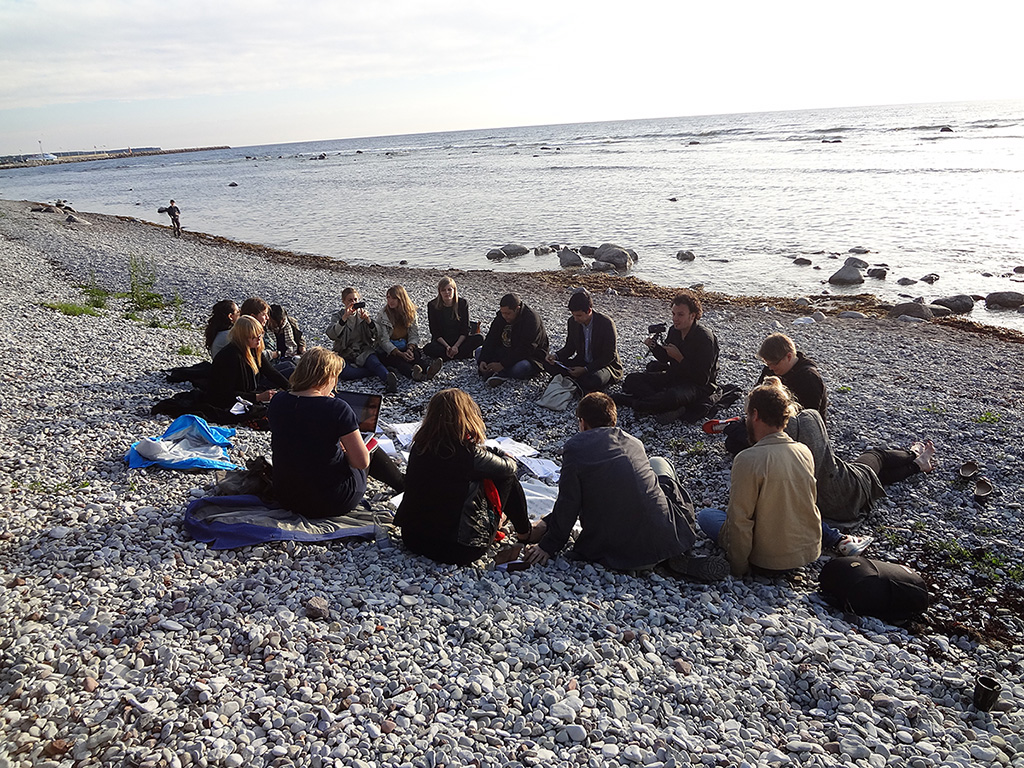 In our times of systemic economic and political crises, rising public indignation and anxiety, artistic projects and exhibitions addressing political issues are once again at the forefront of critical attention. The objective of Curating the Political, the first in the new series of PERPETUUM LABS / BAC, is to engage in a sanguine comparative debate on prominent professional curatorial and artistic projects, addressing the relation of art and politics. The next instance in this series will be Curating the Social, PERPETUUM LABS 2 at Kallio Kunsthalle, Helsinki.

PERPETUUM LABS part 1- Curating the Political is a 3-day event for professional debate and criticism, and constructive and dissenting opinions on primarily exhibition practices in the field. The LAB will use prominent case-studies in curatorial practice as starting points, while drawing on theoretical texts, academic research and activist practice. Each LAB will also develop new approaches and potentials for future projects.

Bringing together established curators and artists by invitation, and a younger generation Nordic and Baltic resident participants by open call, the seminar seeks to develop analytical and nuanced positions starting from diverse set of well-informed standpoints.

PERPETUUM LABS / BAC proposes a number of questions to be discussed regarding the contemporary “political” artistic and curatorial strategies, their pitfalls (e.g. appropriation by the institutions being critiqued) and successes. Questions regarding how the notions of critical art, radical art, subversive art, provocative art, political art, and activist art operate within the current terminology will be raised, in regards to how curators approach, present, and reflect on acute political and social conflicts in the intersection of politics and art.

Based both on both recent projects of the invited international experts, and a selection of recent exhibitions, biennials and projects, the seminar discusses how politics, art and political action are and can be related. The question of whether the demand for “autonomy” is only a tactical/strategic position, or presents truly a philosophical stand, will be looked at. Finally the LAB will consider what role contemporary art plays in examining, articulating and presenting the current political state of affairs using the medium of exhibition. 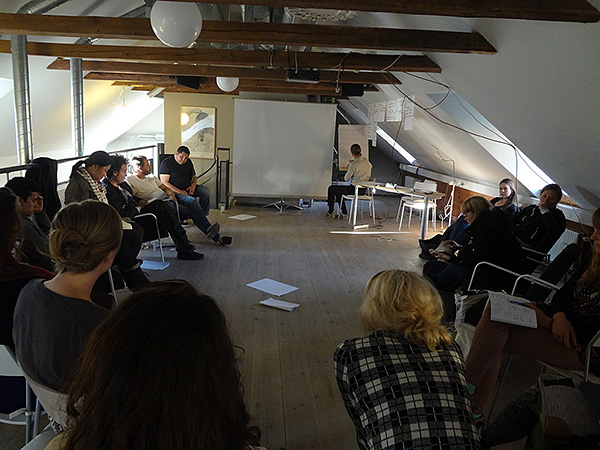 Perpetuum Mobilε, co-founded by Ivor Stodolsky and Marita Muukkonen in 2007, is a curatorial vehicle which brings together art, practice and enquiry and develops longer-term thematic projects including conferences, workshops, residencies and small and large exhibitions. PM has worked extensively at the Nordic region, European and international level. Their projects include The Perpetual Gypsy Pavilion (launched during the 53rd Venice Biennale in 2009), The Arts Assembly, an art-and-debate format which has been deployed at ACSI in Helsinki, the 8th Manifesta Biennale, ENSBA in Paris and CAFA in Beijing. Their most recent thematic project is A Re-Aligned Art.

Bassam El Baroni is a curator, an art critic, and was the co-founder and director of the non-profit art space Alexandria Contemporary Arts Forum between 2005 and 2012. He is also a PhD researcher in the Curatorial/Knowledge program at Goldsmiths, University of London, London. El Baroni is the co-curator of Norway’s Lofoten International Art Festival, Lofoten Islands, 2013 and is also the current curator of the 36th eva International Biennial, Limerick City, Ireland, opening in April 2014. He recently curated the group exhibition When it Stops Dripping from the Ceiling (An Exhibition That Thinks About Edification), Kadist Art Foundation, Paris, 2012. In addition, he was co-curator of Manifesta 8, 2010, Murcia. His other projects include: the ongoing online collaboration The ARPANET Dialogues (with Jeremy Beaudry and Nav Haq), 2010–present; the publication Fifteen Ways to Leave Badiou (2011); and the exhibition Trapped in Amber (co-curated with Helga-Marie Nordby), UKS, Oslo, 2009. El Baroni lives and works in Alexandria and London.

Vladan Jeremić is curator and artists from Belgrade, Serbia. In his curatorial and artistic practice researches the intersection between contemporary art and politics. He was director of the Gallery DOB of the city’s Cultural Center of Belgrade (2008-2009). He has recently curated I Will Never Talk About the War Again, Färgfabriken,Stockholm, 2011)/ Kibla, Maribor, 2012, The Perspectives, Part 1 – The scope of political practices of moving images today, Tulca, Galway, Ireland 2011 and On Use Value of Art, Babel Art Space, Trondheim, 2010. He was initiator of the project Call the Witness – 2nd Roma Pavilion at the 54th Venice Biennial and co-authored pieces with the collective Chto Delat?. His works are in the collection of MUDAM, Luxemburg, Van Abbemuseum, Eindhoven and Museum Reina Sofia, Madrid. As an artist his most recent shows include Places of memory – Fields of vision, Contemporary Art Center of Thessaloniki; Absolute Democracy, Rotor, Graz; Oktobar XXX, 15. Pančevo Biennial, Serbia; The Housing Agenda, Cable Factory Gallery, Helsinki and La maison Folie Wazemmes, Lille; Moving Forwards, Counting Backwards, MUAC, Mexico City.

Nicoline van Harskamp addresses the function and power of the spoken word, and its ability to influence perception and shape thought, both of which are instrumental to politics. Her most recent and ongoing project,Yours in Solidarity, addressing the contemporary history of anarchism through a correspondence archive, was presented in different stages of completion at D+T Project in Brussels, Hillary Crisp Gallery in London, the MUAC in Mexico City, the Frankfurter Kunstverein and Manifesta 9 in Genk. Future presentations will take place at the Shanghai Biennale, the Steirischer Herbst in Graz, , NON Gallery in Istanbul, Centro SUBTE in Montevideo and Extra City in Antwerp. Recent presentations of other works include the Newtopia Biennial in Mechelen, Performa 11 in New York, the Kadist Foundation in Paris, the SMBA in Amsterdam, the Van Abbemuseum in Eindhoven, the 6th Taipei Biennial and the 4th Bucharest Biennial. She lives and works in Amsterdam, and is lecturer in Fine Arts at the Sandberg Institute, Amsterdam. http://www.vanharskamp.net/

Marita Muukkonen has in recent years worked as Curator of HIAP – The Helsinki International Artists-in-Residence Programme and Curator at FRAME-The Finnish Fund for Art Exchange, where she was also the Editor of FRAMEWORK -The Finnish Art Review. Between 2001-2005 she worked at NIFCA- The Nordic Institute for Contemporary Art. Having worked on several Finnish and Nordic Pavilions at the Venice Biennale, in 2010-2012 she co-curated with Power Ekroth the 1st Nordic Pavillion for the Daka’art Biennial in Senegal. She co-founded Perpetuum Mobilε with Ivor Stodolsky in 2007.

Lívia Páldi , born in Budapest, is the director of BAC-Baltic Art Center. Previously she worked as curator and chief curator at the Műcsarnok / Kunsthalle Budapest between 2005 and 2011 where she has organized numerous solo and group exhibitions. Páldi has edited several exhibition catalogues; she was a contributing editor of East Art Map magazine and book organized by the artist collaborative IRWIN in Ljubljana (2002–5). She was one of the curatorial agents of dOCUMENTA (13).

Ivor A Stodolsky (MRes London Consortium; BA Philosophy and Mathematics, Bristol) is a curator, theorist and writer. He curates exhibitions, conferences and events internationally with current events in Berlin (4th Roma-Gypsy Pavilion), Helsinki (Urb Festival, Kiasma Theatre), Tromso (www.Re-Aligned.net) and Stockholm (Past the ‘Post-’ / Generation ‘Pre-’, upcoming conference at Tensta Konsthal). He has worked in philosophy, cultural history and social theory, and his publications appeared in various academic journals. Previously, he was Associate Editor of the global op-ed syndication service Project Syndicate (www.project-syndicate.org) and the co-founder of Perpetuum Mobilε with Marita Muukkonen in 2007.

The project is made possible with the kind support of the Nordic Culture Fund and The Swedish Exhibition Agency.