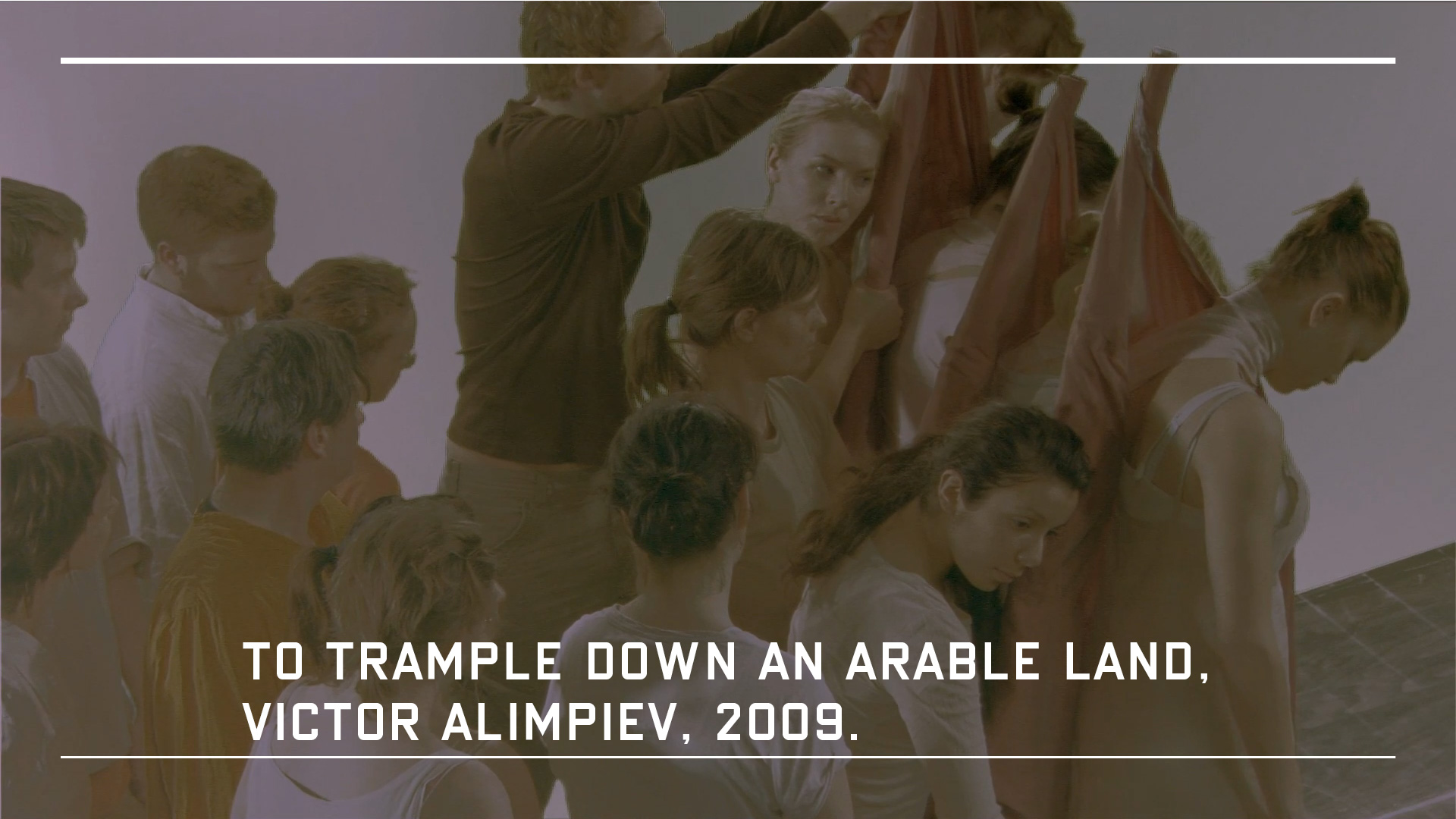 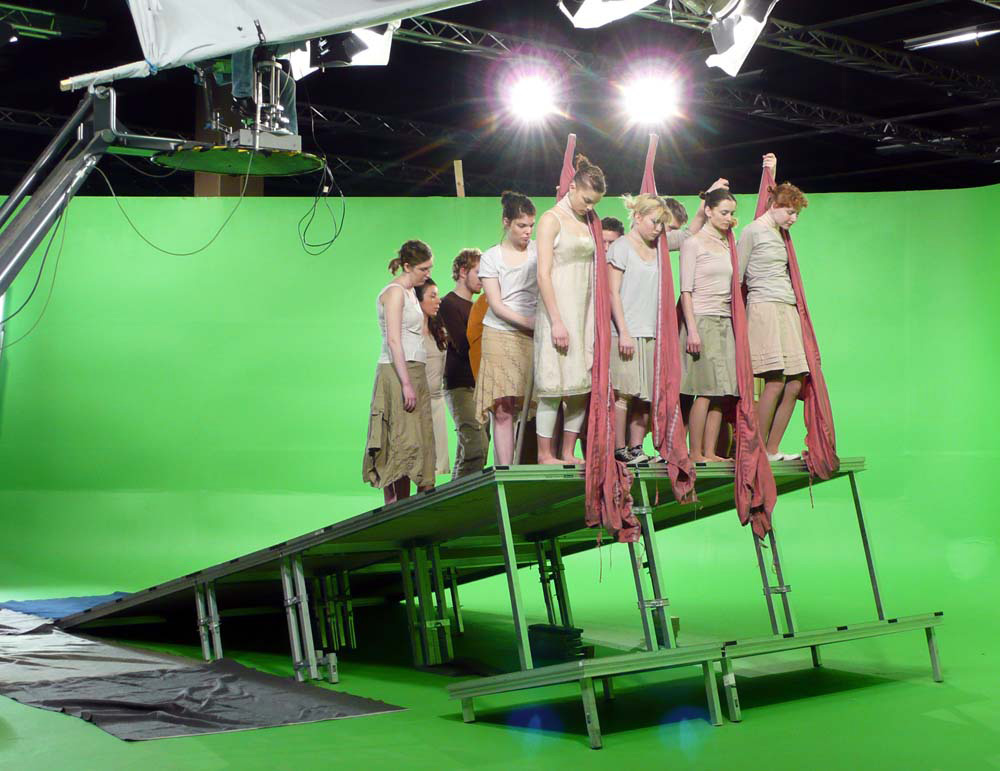 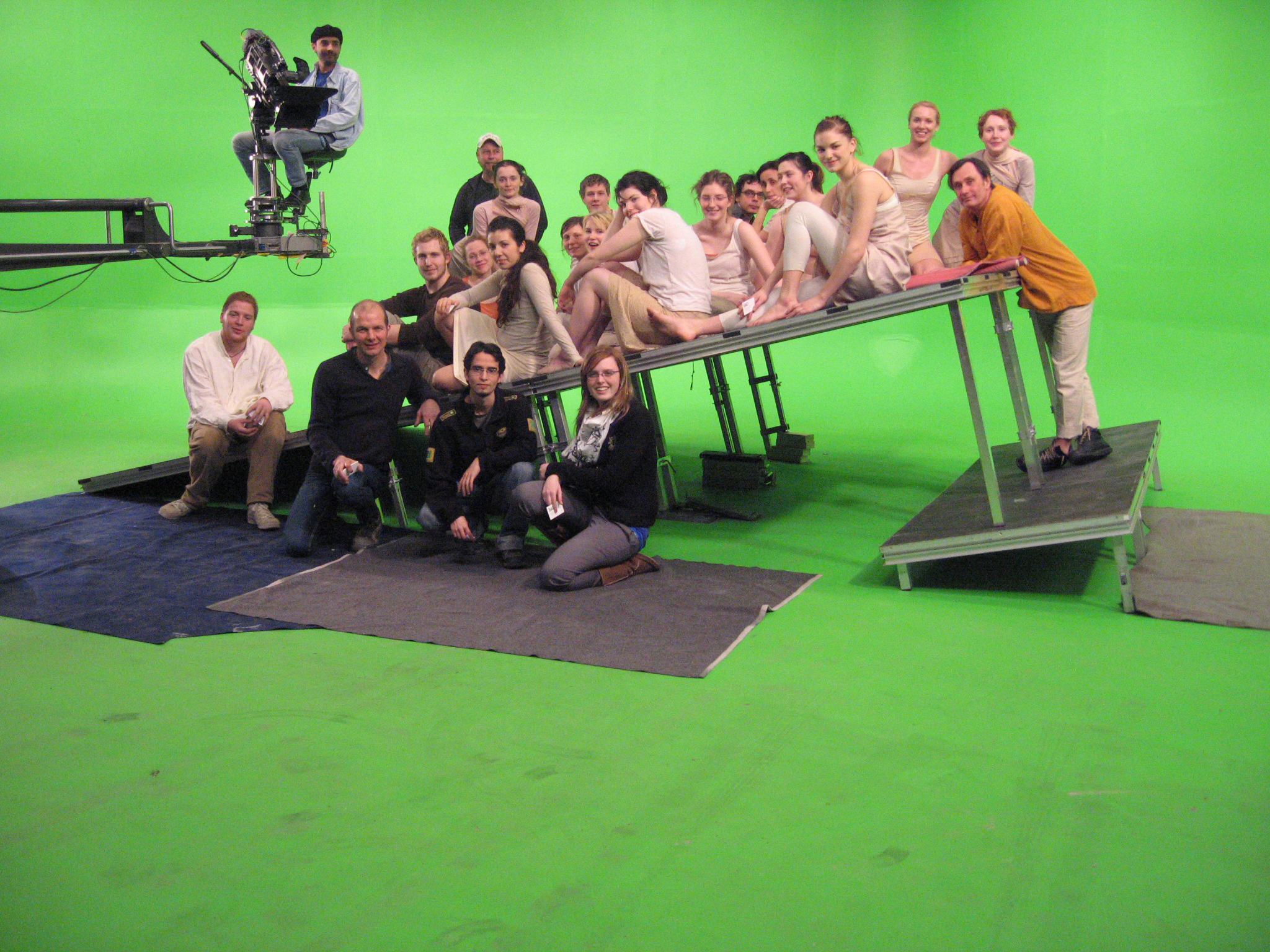 TO TRAMPLE DOWN AN ARABLE LAND BY VIKTOR ALIMPIEV

The Russian artist Victor Alimpiev was one of five artists chosen by a jury to come to BAC within the framework of the Production-in-Residence programme. The artist came to Gotland to make research during fall 2007 and returned in 2009 to produce the 31 minutes long film, To Trample Down An Arable Land. The film was shot in collaboration with Film Gotland, with local dancers as performers, at in the Kustateljé studio in Fårösund.

Victor Alimpiev’s way of working with performance and film was described in the following way on the BAC website:
The people in his works are often engaged in sequences of repetitive, minimalist movements that brings forth their sculptural character. In his focused and formal work Alimpiev explores the subtleties of the human expression; the uncomfortable moments, the habits, and the individual’s relationship to the collective.

The curator, writer and presently cultural counsellor at the embassy of Sweden in Moscow, Maria Lind, was a member of the BAC board until 2008. In a newly written text, she highlights new aspects of To Trample Down An Arable Land that have gained renewed relevance in this time of climate crisis.

A group of young people are gathered in a small white room. They stand close to one another, like a troop of marching soldiers or a group of protestors, pre-COVID-19. In the front row, some hold red flags rolled up on heavy poles; others just stand there. All of them wear simple undergarments, mostly covering their bodies, and they lean forward, sometimes resting on each other. Their physical presence is palpable.

Suddenly they start to move forward, slowly, and those in the front row bend down, as if bowing. They tread upon the lower hems of the flags. The same movements are repeated again and again. The camera follows their gradual advance, keeping steady focus on the collective body, interspersing overviews with close-ups of feet and faces. The image appears bleached out, as if there is too much light to absorb. It is silent, apart from the sound of bare feet and the flagpoles touching the floor. An air of hushed patience envelops the unit as it moves ahead, step by step.

Who are these people, and what are they doing? Their movements look both like a slow effort toward a goal, and an eternal preparation. But for what? Once they reach the wall in front of them, the video ends. We might look to the “arable land” in the title for a clue. The land is not only being stepped on but also trampled, flattened. Perhaps disregarded and made unusable? The beginning of sedentary human civilization, when we began to cultivate plants and domesticate animals, also marks the end of the Holocene—an epoch when the land, the earth, was dominated and abused, and millions of people with it, to the point that the geology and ecosystems changed, bringing us into the current era: the Anthropocene.

The procession of young people in the film struggles forward, making slow progress. Their efforts appear at once archaic and futuristic. Art history offers some iconographic references: for example, Ilya Repin’s Barge Haulers (1873), in which a group of destitutes drags a barge up the Volga River using shear physical power; and The Angelus (1857–1859), by Jean-François Millet. In the latter, two peasants, a man and a woman, pause while toiling on the land to recite the evening prayer, concluding the day’s work. In all of these, bodies perform labor, whether on arable land or not.

Then there are the many heroic Soviet monuments that depict soldiers marching ahead, and of course, the gigantic sculpture Worker and Kolkhoz Woman, from the 1937 Paris World’s Fair, forcefully striding toward the future. In comparison, To Trample Down An Arable Land is certainly not heroic. But it retains a sense of collective action—melancholic collective action, with all feet firmly on the ground.

Victor Alimpiev is a Russian artist, born in 1973, based in Moscow.

Maria Lind is a curator, writer and educator from Stockholm. She is currently serving as the counsellor of culture at the embassy of Sweden, Moscow. She was the director of Stockholm’s Tensta konsthall 2011-18, the artistic director of the 11th Gwangju Biennale, the director of the graduate program, Center for Curatorial Studies, Bard College (2008-2010), director of Iaspis in Stockholm (2005-2007) and the director of Kunstverein München (2002-2004). She has taught widely since the early 1990s, including as professor of artistic research at the Art Academy in Oslo 2015-18. Currently she is a lecturer at Konstfack’s CuratorLab. She has contributed widely to newspapers, magazines, catalogues and other publications. 2010 Selected Maria Lind Writing was published by Sternberg Press, and Seven Years: The Rematerialization Art from 2011 to 2017 appeared in the fall of 2019. In 2021, Konstringar: Vad gör samtidskonsten? was published by Natur & Kultur.