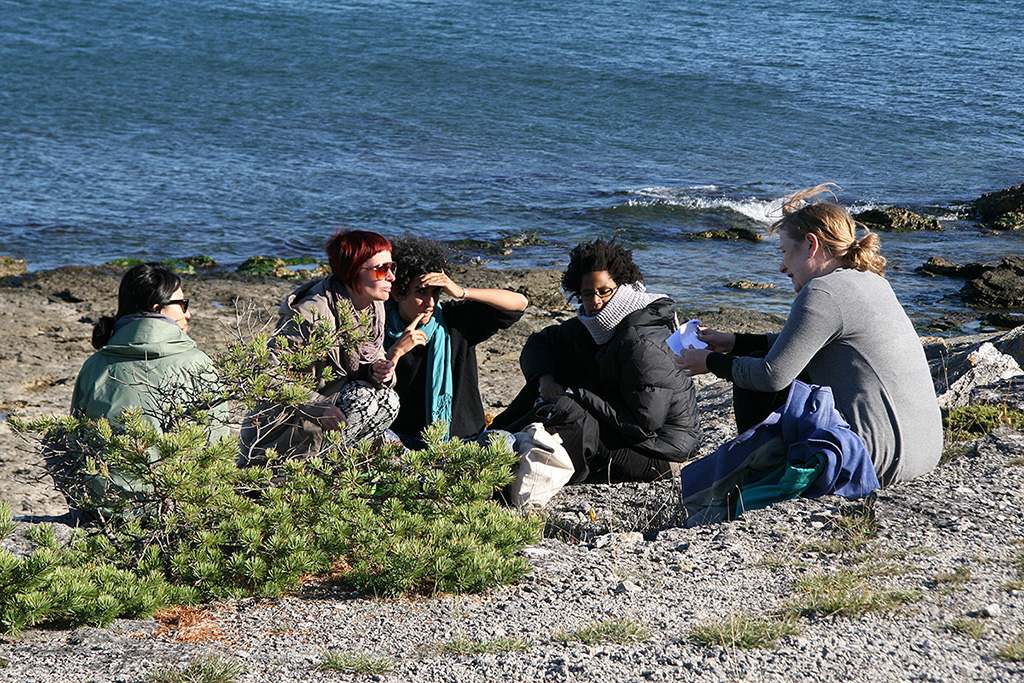 Dutch artist Nicoline van Harskamp has been working on an ongoing project and a film on the topic of the English language by a person with a mother tongue other than English. She is staging a number of language experiments around Europe and is using Gotland for a scene for her new video work in the overall project called “Englishes”.

Today the majority of  ideas brought forward in the arts of any kind, have likely been conceived in the English language by a person with a mother tongue other than English.

For every native speaker of the English language, there are 4 non-native speakers. As the world’s primary lingua franca, English is now a language of non-standards whose syntax, vocabularies and pronunciation vary across the globe. Strangely, this language does not itself have a name or status; its use is considered something of a natural fact; and its artistic potential is largely ignored.

There are several causes and effects of the prominence of English, many of which can be judged undesirable. But when English speakers world-wide would rid themselves from a single native-speaking standard and from proficiency qualification; when they would co-opt the language that they may or may not feel has been imposed on them, the possibilities for emancipatory and creative use are abundant. The aesthetic problems of using English as a simplified relay language between different tongues may dissolve. The suffocating influence of professional jargon may disappear. Utopian, often universalistic, language projects of the past may be renewed.

Dutch artist Nicoline van Harskamp has been working on an ongoing project and a film on this topic, that includes a number of language experiments around Europe.

For the experiment on Gotland, 4 artists from Serbia, Korea, Cuba and Tehran come together in a house in Hangvar. The house represents a ‘place without language’, i.e. some kind of  linguistic neutrality. Katarina Popovic, Jinjoo Kim, Susana Matienzo and Setareh Fatehi, each speak a very different version of English that they have learned and developed in their respective countries. In the course of 3 days, they will bring each others’ Englishes closest possible to one common point. Not in terms of what is most intelligible (there are studies and theories around that already that usually involve simplification) but in terms of an ambition or desire they might have for the future use of a “common” language, especially in relation to the arts.

Finally, the participants and Nicoline van Harskamp will create a small scene that is scripted in the desired English(es), that will be staged in one of the beautiful settings that Gotland offers. Together with extensive recordings from the working-process, this scene will be included as a video work in the overall project “Englishes”.

An earlier piece was commissioned by BMW Tate Live: Performance Room in 2013. You can view it online.

Nicoline van Harskamp The recent works of Nicoline van Harskamp (1975) deal with the power of the spoken word and its ability to shape thought and social experience, both of which are instrumental to politics. Her project "Yours in Solidarity" was presented in different stages of completion at D+T Project in Brussels, Hillary Crisp Gallery in London, the MUAC in Mexico City, the Frankfurter Kunstverein, Manifesta 9 in Genk, the Shanghai Biennale 2012/13 , the Steirischer Herbst in Graz, GMK Gallery in Zagreb and Extra City in Antwerp. At New Art Space Amsterdam she presented the completed version of the project for the first time from March 2013. Recent presentations of other works include the Newtopia Biennial in Mechelen, Performa 11 in New York and the Kadist Foundation in Paris, the SMBA in Amsterdam, the 4th Bucharest Biennale, the 6th Taipei Biennale. Nicoline van Harskamp has staged her live pieces at Witte de With in Rotterdam, the New Museum in New York, the Stedelijk Museum in Amsterdam, the Serralves Foundation in Porto, the Van Abbe Museum in Eindhoven, the Kaaitheater in Brussels and the BMW Tate Live Performance Room. She was a resident artist at, among others, Platform Garanti in Istanbul, the Rijksakademie in Amsterdam and IASPIS in Sweden. In 2009 she won the Dutch Prix de Rome. Nicoline van Harskamp lives and works in Amsterdam, where she teaches a fine arts masters at the Sandberg Instituut.

“Englishes” is funded by The Mondriaan Fund, Amsterdam. The Gotland chapter is supported by BAC and Film on Gotland and made possible with the Regional Development Fund from the Swedish Arts Council.