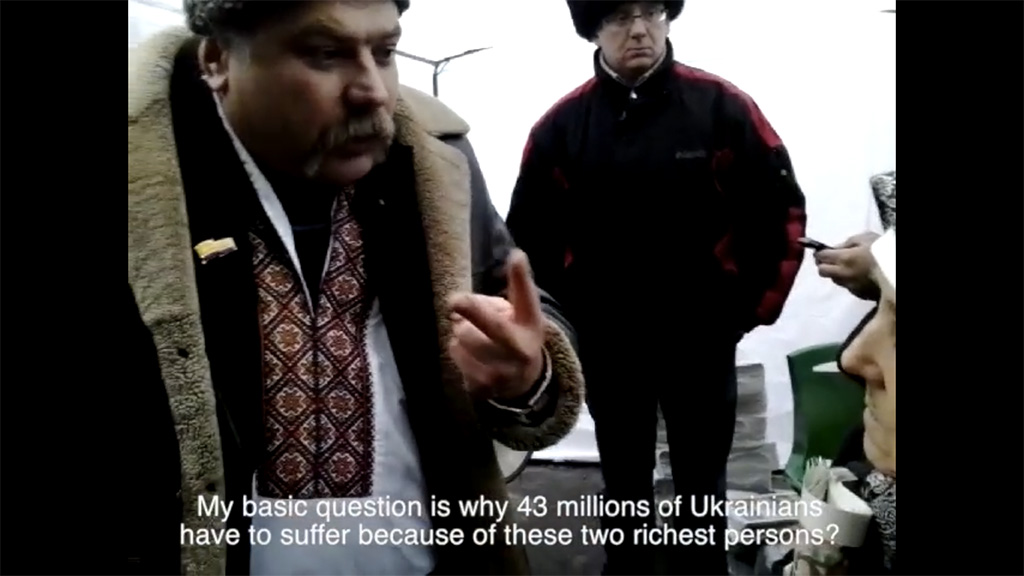 The lecture is followed by the screening of the documentary MAIDAN (2014) by Ukrainian filmmaker Sergei Loznitsa.

The lecture and screening of Liza Babenko’s short videos; Maidan: Lost Revolution, (2014), and Banderovite (2013) will focus the post-colonial, social and visual analysis of the Ukrainian Maidan revolution, from an internal perspective. Position of the Ukrainian “Other”, which historically belonged to the Crimea and Donbass, will be problematized as an post-colonial evidence of a country broken into several national identities. Based on the researches of the Ukrainian political and historical situation, Babenko discusses the necessity of actualization in nowadays “post-Maidan” Ukraine such analytical categories as nationalism, patriotism, national identity politics and politics of memory concerning the Second World War. Besides, taking into consideration the activation of the new oligarchic elites in Ukraine following the Maidan events, Babenko proposes to go out of the both mainstream and populist propagandas (Russian imperialistic and Ukrainian nationalist-patriotic agendas) and try to find a more socially oriented and united all Ukrainian regions form of the possible revolution. 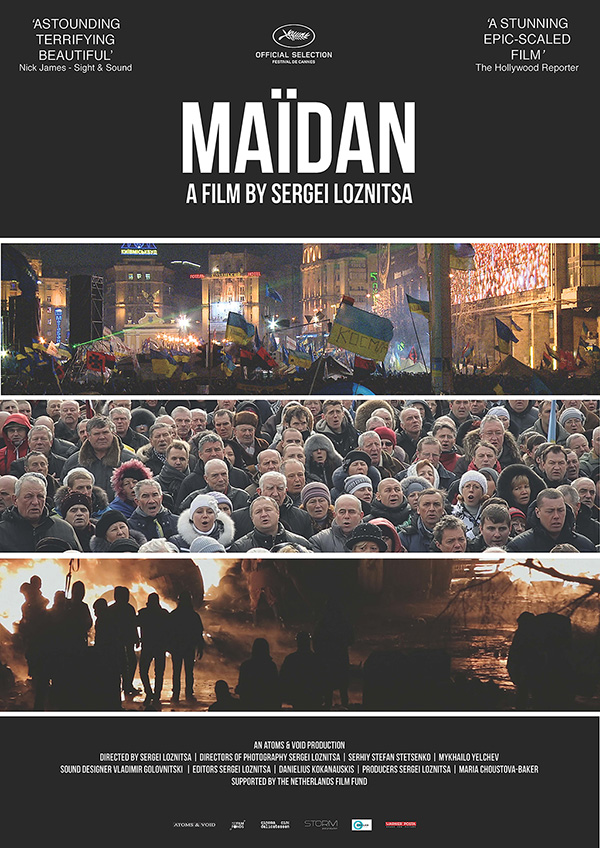 MAIDAN chronicles the civil uprising that took place in Kiev (Ukraine) in the winter of 2013/14. The film follows the progress of the revolution: from peaceful rallies, half a millionstrong, in the Maidan square, to the bloody street battles between the protestors and riot police. MAIDAN is a portrait of an awakening nation, rediscovering its identity. Director Sergei Loznitsa rises above current political issues and looks at the nature of the popular uprising as a social, cultural and philosophical phenomenon. A powerful mix of enthusiasm, heroic struggle, terror, courage, aspiration, people’s solidarity, folk culture, passion and self-sacrifice, MAIDAN is a stunning cinematic canvas combining classical film making style and documentary urgency.

Sergei Loznitsa (b. 1954) is a Ukrainian film maker He graduated from the Kiev Polytechnic with a degree in Applied Mathematics 1987. Until 1991 he worked as a scientist at the Kiev Institute of Cybernetics, specializing in artificial intelligence research. He also worked as a translator from Japanese. In 1997 Loznitsa graduated from the Russian State Institute of Cinematography (VGIK) in Moscow, where he studied feature film making. He has directed 16 documentaries and received numerous international awards, including festival prizes in Karlovy Vary, Leipzig, Oberhausen, Krakow, Paris, Madrid, Toronto, Jerusalem, St-Petersburg, as well as the Russian National Film awards “Nika” and “Laurel”. Loznitsa’s montage film Blockade (2005) is based on the archive footage of besieged Leningrad. His feature debut My Joy (2010) and second feature In the Fog (2012) were both premiered in the main competition at the Festival de Cannes, where the later was awarded the FIPRESCI prize. In 2013 Loznitsa launched a film production and distribution company ATOMS & VOID. His feature length documentary MAIDAN, dedicated to the revolution in Ukraine, was premiered at the Festival de Cannes 2014. He is currently preparing for his next feature film, “BABI YAR” which will narrate the events that took place in Kiev in the beginning of Nazi occupation.

Gotland Film Lab residency and events were made possible with the support of the Swedish Arts Council`s Regional Development grant.